U15A County Hurling Champions and beyond… 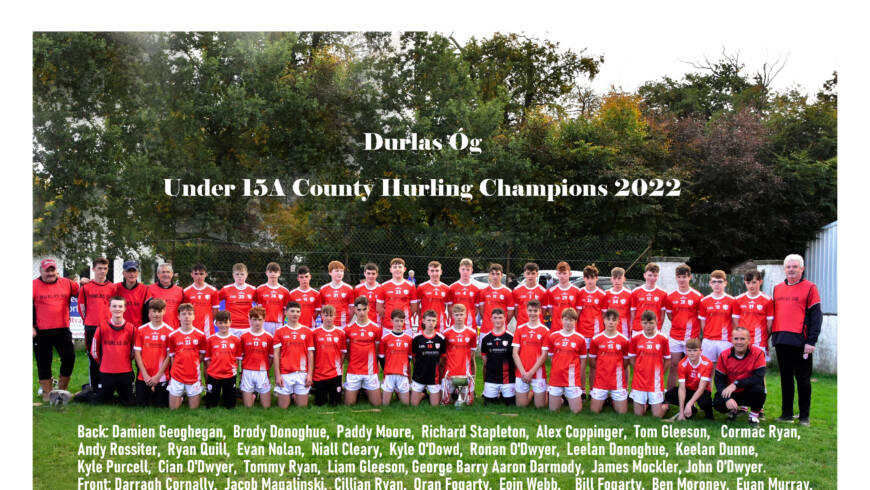 2022 will be remembered for a lot of things, but for the U15 boys of Durlas Óg, it will be extra special indeed. They have been almost untouchable throughout the season. In hurling they won the U15A Mid & County titles and in the Féile  they won the Mid, County & National Hurling Féile in the A Division, only our 2nd time winning it and we are still the only Tipperary Club to win it outright. In Football they won the Mid & County of both Féile & Coiste na nÓg in the A Division but were unfortunately defeated in the Féile Football final by Dromintee of Co. Armagh. Playing in 2 Féile’s two weeks in a row and getting to the final of each, proving just a bridge too far for this phenomenal group.

Victory in the Hurling Féile, our first since 1991, was their greatest achievement of the year, and a monumental effort was needed by all and sundry to get over the line. Abbotstown was to be the venue for these boys to come of age, and that they did, with victories over St. Judes of Dublin, Clooney Quin of Clare, the favourites James Stephens in the semi-final and Mick Mackey’s Club Ahane in the Final. We ran out comfortable winners in the final, 2.16 to 0.03 and Evan Nolan gladly accepted the famous Féile Trophy from Diarmuid Cahill, Chairman of the Féile na nGael Committee. Durlas Óg remain the only Tipperary Team to win the tournament outright, Drom-Inch having shared the spoils with Sixmilebridge back in 1995. It really is an incredible achievement to win a Féile, and these boys will have memories to cherish forever, and a special thanks to John O’Loughlin for capturing every step of their journey. 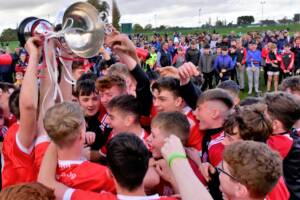 Led by Club Stalwart and dyed in the wool Durlas Óg man, Raymond “Rocky” O’Dowd, they have been exemplary on and off the pitch all season. Their attitude and commitment to each other & their coaches has been nothing short of excellent. It is very clear to see they are a very close-knit group, always walking around Thurles together with their hurleys & sliotars, constantly practicing and sharpening their skills. It’s easy forget these boys are only 14 and 15 years old, they play with such honesty, integrity and skill, that one could be forgiven for thinking they are much older. The sky is the limit for these boys, they have been nurtured by their schools and all their coaches up along the years. How wonderful that Paddy Moore, a coach to many kids in schools around Tipperary for many years, was a massive part of Rocky’s coaching ticket this year, along with Damien Geoghegan, Richie Stapleton, Wayne Keane and John O’Dwyer. 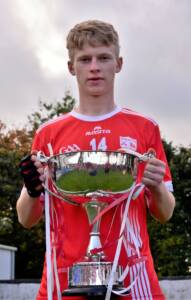 A special word of thanks must go to the parents of the boys involved in the U15 panel. They have facilitated “Rocky” and his coaching team 100% and in doing so, have ensured their boys fulfilled their potential fully during 2022. “Rocky” brings an extremely professional attitude towards the Management of his players and he never leaves a stone unturned, the two weekends spent at the Féile’s went off without a hitch and each and every one of the boys was turned out exceptionally and their behaviour was exemplary on both days, well done boys.

Having gotten over the line against Toomevara to win the U15A Hurling County Final, the lads have won an incredible 9 finals, out of a possible 10 in 2022. To be so successful, with one team, in one season, is an incredible achievement & legacy to have your name associated with.

Durlas Óg are proud of all their players every time they take to the field, but in 2022, I think all the people of Thurles & Tipperary should be proud of these players. From their families, their schools, their friends & their coaches you have all played a massive role in their fantastic achievements this year. You have all played a part, both big & small, in the development of a phenomenal group of young men.

We look forward in anticipation of what the future brings for all these boys.