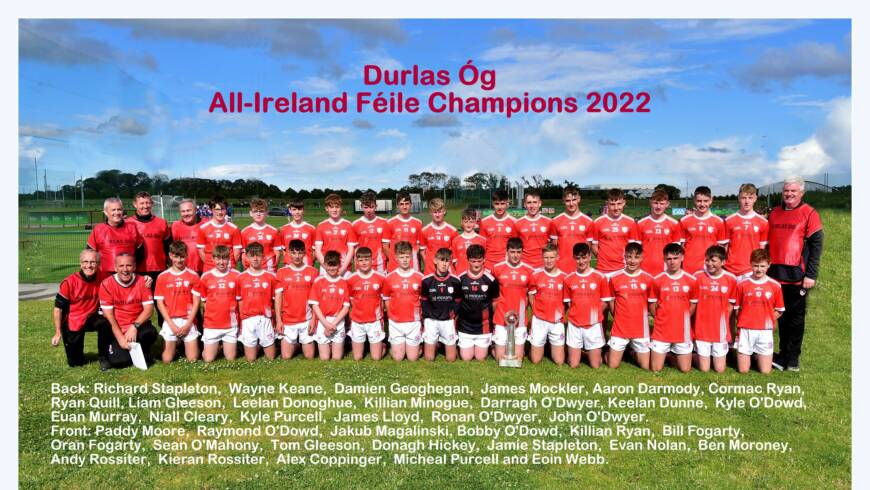 A wise man once said, “The dogs in the street have a mid medal”….he never said anything about who had Feile na Gael medals though, it was most likely those pesky cats! However, there were only stallion race horses on show in Dublin last weekend, and they were wearing the famous red and white of Durlas Óg.

Saturday, June 25th, will be a date that will live long in the memory of our victorious Durlas Óg U15 A Hurlers as they stormed to an epic win against a dogged Ahane team on a score line of 2.16 to 0.03! Goals from Euan Murray and Killian Minogue putting the icing on an already tasty cake.

This was Durlas Óg’s second ever win in the ‘A’ Feile na Gael Hurling, our first coming way back in 1990, when Jimmy D’Arcy Captained a star-studded team to victory on home soil in Thurles. We are still the only Tipperary team to win the competition outright, with Drom Inch having shared their victory with Sixmilebridge in 1995. It just goes to show you how difficult this competition is to win.

Managed by Raymond ‘Rocky’ O’Dowd and Captained by the teak tough Evan Nolan, these boys knew destiny awaited them once they stepped off the bus in Abbottstown to face St. Judes of Dublin. They got off to a terrific start and ran out comfortable winners 1.17 to 0.05. Onwards to Clooney Quinn in the next game and they succumbed to a similar fate, our boys rampaging home 3.11 to 1.2.

In the semi-final we faced a much-fancied James Stephens team, they made us work tooth and nail for every ball and every score! Goals were not easily got, but we kept the score board ticking over and a Leelan Donoghue goal proved to be crucial, as we won an epic contest, 1.7 to 2.2! We now faced Ahane of Limerick in the final. The tails are up down along the Shannon in recent years, but these young men don’t conform to the norm, and they went at Ahane from the off and raced into an early lead, settling any nerves their anxious parents might have had!! Having watched these boys play over the years, they should have known they don’t do nerves, and they went about their business with ruthless efficiency and we ran out comfortable winners in the end, 2.16 to 0.03, tremendous end to an historic day.

Evan Nolan accepted the cup on behalf of his teammates, from Feile Committee Chair, Diarmuid Cahill and in their now customary way,  the boys let Evan lift the cup before running in and starting the celebrations in their own excitable way. It’s easy forget these boys are only 14 and 15 years old, they play with such honesty, integrity and skill, that one could be forgiven for thinking they are much older. The sky is the limit for these boys, they have been nurtured by their schools and all their coaches up along the years. How wonderful that Paddy Moore, a coach to many kids in schools around Tipperary, was part of Rockys coaching ticket this year, along with Damien Geoghegan, Richie Stapleton, Wayne Keane and John O’Dwyer.

A fitting link to the 1990 team was young Keelan Dunne, a formidable athlete and vital cog in the wheel of this team, who’s father David played on the victorious 1990 panel. A special word of thanks to John O’Loughlin, who again has created lasting memories for these boys and their families with his photographs, thanks John.

Finally, thanks to all our sponsors who helped equip Rocky, his coaches and his players fully for their Feile triumph. Your generosity has given these boys one of the greatest days of their young lives.

We now focus our attention to the Féile Peile na nÓg in Newbridge next weekend, do we dare to dream that they can go to the well one more time and return with another National Title? Best of luck to Rocky and his thoroughbreds, they won’t be found wanting I’m sure.