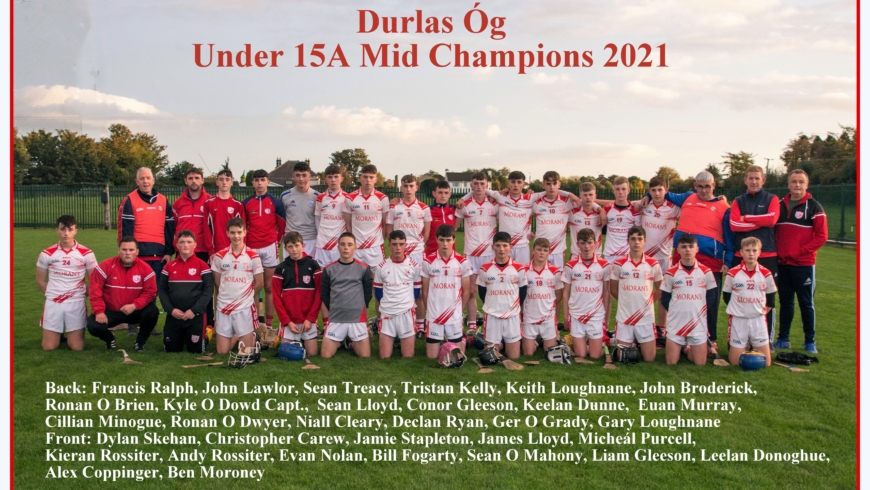 Huge congratulations to Durlas Óg who were crowned Mid U15A Hurling Final in a pulsating affair this evening, Read our match report below to get all the info.
Spain Family Mid U15A Hurling Final 20-10-21
Durlas Óg 5-16
Holycross Ballycahill 4-13
By Mark Dunne PRO
Dr Morris Park, the venue which has seen many talented inter county hurler grace its fields was the idyllic setting for this pulsating affair where the large crowd undoubtedly saw our future stars in full flight. A nine goal thriller coupled with a heart stopping second half eventually saw Durlas Óg emerge champions but not without Holycross asking many questions of them.
Holycross opened the scoring with a Robbie Ryan free following great play by young Tiernán Ryan. Durlas Óg didn’t take long to respond with U13 star Euan Murray netting after a serious run from the 45m line. Ryan pointed a 65 to narrow the gap before the score was again pushed out with a Tristan Kelly point. Robbie Ryan again was in action when he pointed from close range, a chance that could easily have led to a green flag. Durlas Óg though made no mistake with their goal chances. A ball into Tristan Kelly was fumbled in the square but Kelly was quickest and tapped in to give his team a 2-01 to 0-03 lead. The scores were coming thick and fast with Lahart and a Ryan free reducing the gap to two. Durlas Óg smelled goals and their third came soon after. A wonder catch from Man of the Match Ronan O’Brien saw him find Kelly who popped a glorious pass to Minogue who netted. Holycross though sought their own but only for the heroics of young Kieran Rossiter who pulled off two fine close range shots from Eoghan Hickey and Sean Ryan to deny the Cross. O’Brien pointed his first free of the encounter to have the score 3-02 to 0-05 at the water break. Durlas Óg came out gunning in the second quarter and began to dominate proceedings in front of the large crowd. O’Brien pointed a free following two from play, this coupled with a Euan Murray score pushed their lead to ten. This though was extended shortly afterwards with Murray again involved. His superb pass found Kelly for his sides fourth of the evening. O’Brien who was ever accurate from frees added one more before his counterpart Robbie Ryan pointed for his sides first score of the second quarter on 25mins. Durlas Óg got the next two to keep daylight between the sides, this time O’Brien and Murray the providers. Holycross got the last score of the half with Ryan pointing to leave the scores 4-09 to 0-07 at the break.
The teams emerged from their sós and Holycross reenergised as they would go on to outscore Durlas Óg 3-04 to 0-02 in this quarter to leave a pulsating final quarter in score. Robbie Ryan pointed an early free with Captain Evan Morris leading the way. Tadhg Nally scored his first of the affair before Minogue got a good score out near the side line. Holycross were beginning to take control at this point and Sean Ryan continued their good form with a fine score. Robbie Ryan then narrowed the game even more. Ryan took on the Durlas Óg defence, was fouled and he scored a rocket of a goal from the 21m free. Ryan was now causing serious worry for the Durlas Óg management and this got worse soon after. A good ball from Nally found the aforementioned Ryan and he once again made no mistake and scored a good goal. 4-10 to 2-10, a serious game now in store. Nally who was now operating well brought five between the teams before the dangerous Ryan completed his hat trick. This time a long ball in saw Ryan get an important touch to take the ball away from Rossiter, with Ryan again making no mistake. Two points between the sides with the water break approaching. Durlas Óg though scored a vital score on the stroke of the break with O’Brien again pointing from close range. 4-11 to 3-11, sós uisce. Durlas Óg returned to the field with the Holycross threat still prominent. They got off to the better start with the next two scores, a free from O’Brien along with another good score from Minogue. Five now between the sides. This game was far from over and Holycross continued to push. Again, Ryan became the finisher. A long free in saw Ryan rise highest and flick to the Durlas Óg net. Nally scored another point following serious play again by Tiernán Ryan. The minimum now between the sides and the temperature of the cold evening rising significantly. Ronan O’Brien cemented his man of the match award with the next score, a wonder point from out on the side-line. Jack Lahart brought the game back to one again. Holycross desperately sought the equaliser and came close. Durlas Óg though used their experience in this one and grounded out the next two scores with O’Brien and Murray the providers. The full time whistle sounded with the crowd still trying to gather their breath. An outstanding second half of hurling eventually saw Durlas Óg crowned champions on a 5-16 to 4-13 score line.
Captain Kyle O’Dowd collected the trophy from Mid Board Chairman PJ Bowden and sponsor Sean Spain. Mid Board Secretary Michelle McKelvey presented Ronan O’Brien with his well-deserved man of the match award.
Scorers:
Durlas Óg: Euan Murray (1-03), Tristan Kelly (3-01), Cillian Minogue (1-02), Ronan O’Brien (0-03 frees, 0-01 65m, 0-06 play)
Holycross Ballycahill: Robbie Ryan (1-05 free, 0-01 65m, 3-01 play), Jack Lahart (0-02), Tadhg Nally (0-03), Sean Ryan (0-01).
Referee: Tom Loughnane (Gortnahoe Glengoole)
Photos with thanks to John O’loughlin at https://durlasog.com/gallery/under-15a-mid-final-2021/