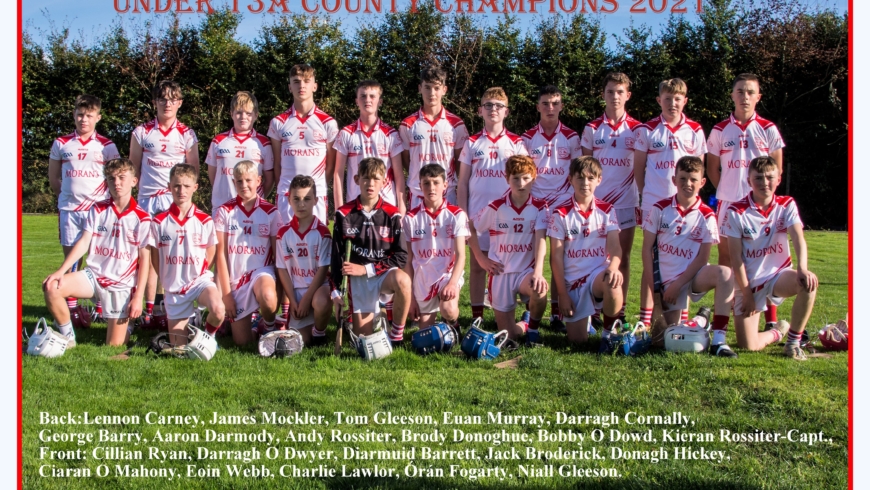 Borrisoleigh 2-07
Durlas Óg 6-08
By Mark Dunne
Clonoulty once again provided the venue for this the County U13A Hurling Final and what a final the large crowd were treated too. A strong opening half saw the North Champions lead at the break but Durlas Óg never gave up and emerged champions thanks to a brace of second half goals.
The game opened at a whirl wind and continued this way for the fifty minutes. Borris Captain Jack Bevans got his side into an early lead with a good score. This was quickly cancelled out with an Andy Rossiter point following a super ball by Brody Donoghue. Borrisoleigh though kicked on and began to dominate proceedings. Cathal Kennedy was dangerous from frees and he pointed two in quick succession. Indeed, Kennedy could have had his sides first goal of the game but his shot was brilliantly saved by Donnagh Hickey in the Durlas Óg net and over for a point. The next play proved pivotal for Borris, Patrick Groome getting on the end of a lovely ball from Bevans and Groome made no mistake with his chance and buried it into the net. Durlas Óg could have had a goal shortly afterward with Cornally coming close. Webb pointed a free to send the teams in at the water break on a 1-04 to 0-02 score line. The teams emerged refreshed and Borris kicked on. A Kennedy free came before Bevans got his sides second goal. A long ball in saw Bevans accurately bat to the net. Durlas Óg though did not panic and they themselves got their first goal of the afternoon. A Euan Murray free was brilliantly saved but young Eoin Webb was fastest to react and netted. Durlas Óg now began to motor and Rossiter scored a peach of a point close to the side line. Kennedy again pointed a free before Durlas Óg got a crucial score before the break. A long Euan Murray ball in was brilliantly taken my Webb who finished neatly to the top corner to put three between the sides at the break.
The teams emerged with the crowd reenergised for what was to come! The opening quarter was tight with some hard fair hits going in. Durlas Óg narrowed the gap to two with an Aaron Darmody point. Borris’ accurate free taker Kennedy again produced another fine score. Durlas Óg got the score they needed to tie up the affair. Kieran Rossiter again involved, his initial shot was well saved by Michael O’Brien but the ball bounced back to Rossiter who wasn’t going to miss again. Game level! Rossiter though wasn’t content with level and he put his side one up shortly afterwards with another good score. Durlas Óg now with their tails up pushed on. Credit to Borris who made them work for each and every score. Murray who provided a lot of the assists got himself on the scoresheet with a slick bit of play to put the ball into the back of the Borris net for his sides fourth goal. 4-05 to 2-07 at the water break. The teams again emerged with an exciting final quarter in store. Durlas Óg though never faltered. Andy Rossiter pointed after the break before Darragh Cornally scored another goal for Durlas Óg. Borrisoleigh worked hard in this quarter but they just were not able to contain Durlas Óg. Captain Rossiter stepped up scoring 1-01 in the final minutes with Euan Murray adding the final score of the contest. Full time score Durlas Óg 6-08 Borrisoleigh 2-07.
Team and scorers:
Durlas Óg: Donnagh Hickey, James Mockler, Oran Fogarty, Brody Donoghue, Euan Murray (0-02), Ciaran O’Mahony, Darragh O’Dwyer, Andy Rossiter (0-02), Niall Gleeson, Aaron Darmody, Darragh Cornally(1-00), Eoin Webb (2-01), Kieran Rossiter (3-03), George Barry, Bobby O’Dowd, Lennon Carney, Charlie Lawlor, Jack Broderick, Cillian Ryan, Tom Gleeson, Diarmuid Barrett.
Borrisoleigh: Michael O’Brien, Daniel Groome, Liam Kinane, David Rabitte, Michael Ryan, Eoin Anderson, Eoin Ryan, Jack Gould, Cathal Kennedy (0-06), Shane Ryan, Jack Bevans (1-01), Sam Clarke, Patrick Groome (1-00), Keith O’Dwyer, Tadhg Kelly, Paul Kinane, Daniel Ryan.
Referee: Donie Horan