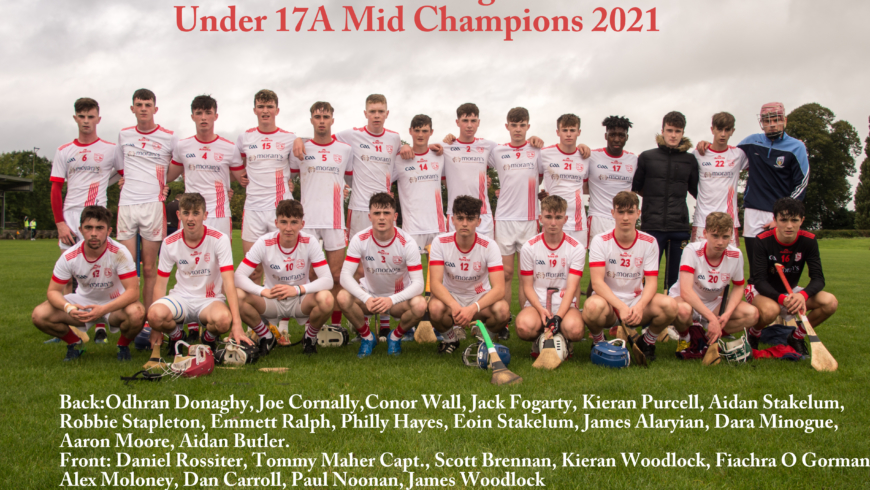 Congratulations to our U17 players and mentors on winning the U17A Mid Hurling final recently.

Durlas Óg 5-18
Holycross Ballycahill 4-11
By Mark Dunne PRO
Templemore provided the perfect backdrop for this cracker as we saw a strong second half display from Durlas Óg be enough to crown them Stakelum Office Supplies Mid U17A Champions.
Although the final score is commanding the open half of this game was a thriller. Holycross kicked off the scoring with a Robbie Ryan free following good play by young Rory Flemming. Captain Tommy Maher soon cancelled this out with an outstanding score from the middle of the field. Both teams were raring to go and it was the cross who would raise the first of nine green flags over the sixty minutes. A long free in struck the post and it was Eoin Craddock who was fastest to react and he tapped in to give his side a 1-01 to 0-01 lead. Holycross now with their tails up kicked on and got the next two scores courtesy of the ever accurate Robbie Ryan and Liam Doyle up from wing back. Durlas Óg though didn’t panic and got the last two scores of the quarter with Robbie Stapleton and Fiachra O’Gorman pointing. 1-03 to 0-03 at the water break. Durlas Óg came back from the break looking to level things and level things they did. Route one hurling for Jack Fogarty who took on the Holycross defence and scored to level the game. Aidan Stakelum got his first of the day in what could easily have been a goal only for a brilliant Jim Ryan hook. Durlas Óg now in the lead but not for long. Robbie Ryan pointed a tight angle free before Eoin Craddock got his sides second goal with a lovely dink over Aidan Butler’s head. Holycross now were beginning to fire and Robbie Ryan again pointed this time from play to put four between the sides. James Doyle added another long range point before Robbie Stapleton pulled one back for the town side. Daniel Rossiter then reduced the gap to three with the half almost up. Durlas Óg kept fighting and were rewarded for their efforts. A ball across the Holycross goal broke down and out of the ruck Jack Fogarty pulled and netted to level the game at half time. 2-06 apiece.
The large crowd in attendance knew we were in for a cracking second half and it didn’t disappoint. Durlas Óg started at pace. A long Kieran Purcell ball in broke handsomely for Rossiter who made no mistake and netted for his sides third goal. Stapleton added another one shortly afterwards before Jim Ryan pointed a long range free to put three between the sides again. Durlas Óg though were beginning to dominate proceedings and shortly afterwards got their fourth goal. A huge puck out from Aidan Butler was brilliantly taken by Stapleton who finished neatly to the net. Durlas Óg now had their tails up as Rossiter added another. Durlas Óg were flying now and shortly afterwards put ten between the teams. Aidan Stakelum this time working hard in the Holycross square and he got the ball past James Dwyer for his sides fifth. Credit to Holycross though, they never gave up and Robbie pointed once again. Durlas Óg though pushed on before the water break with Stapleton, Stakelum and Maher all pointing to send their side in 5-11 to 2-08 up at sos uisce. The teams emerged and Durlas Óg kicked on once again, with Rossiter pointing from a tight angle. Lee Ferncombe pointed for the cross before Kieran Purcell knocked over a long range free. The scores were coming thick and fast and Holycross were rewarded for their work rate at this point. A super bit of play involving Ryan and Lahart set up James Doyle who blasted past Butler, 5-15 to 3-09. Durlas Óg responded well and knocked over the next two scores courtesy of Stapleton and O’Gorman. James Doyle clawed another back for Holycross before another goal for the men in green. The quick thinking Robbie Ryan played a short free to Craddock who netted to put eight between the sides. Durlas Óg however quickly cancelled the goal out by getting the next three scores from Stapleton, O’Gorman and Stakelum. Jimmy Lahart got the final score of the contest as Durlas Óg ran out 5-18 to 4-11 winners in a titanic battle.
Captain Tommy Maher collected the trophy from Mid Board Chairman PJ Bowden while Aidan Stakelum picked up the Man of the Match Award from Mid Board Secretary Michelle McKelvey.
Scorers:
Durlas Óg: Tommy Maher (0-02), Robbie Stapleton (1-06), Fiachra O’Gorman (0-03), Jack Fogarty (2-00), Aidan Stakelum (1-03), Daniel Rossiter (1-03), Kieran Purcell (0-01).
Holycross Ballycahill: Robbie Ryan (0-05), Eoin Craddock (3-00), Liam Doyle (0-01), James Doyle (1-02), Jim Ryan (0-01), Lee Ferncombe (0-01), Jimmy Lahart (0-01).
Referee: Tom McGrath (Loughmore Castleiney)