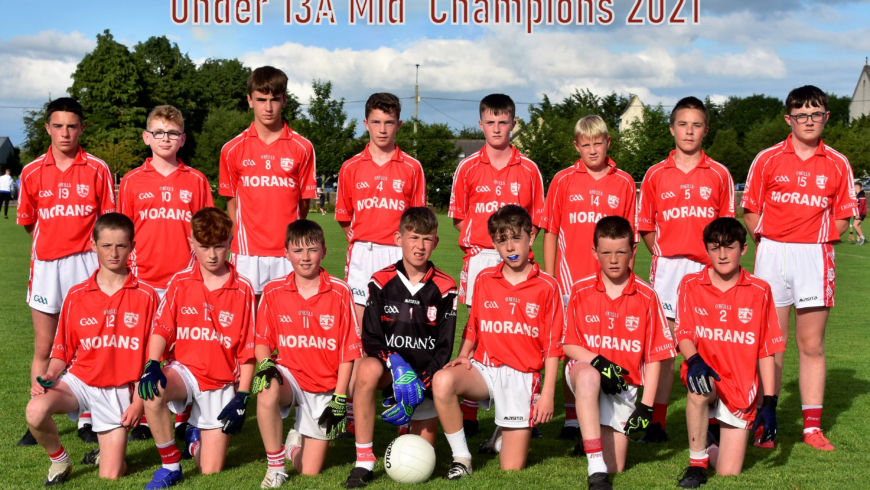 SHARE
Hanafins’ Mid U13A Football Final
Dúrlas Óg 2-06
JK Brackens 3-00
Match report courtousy of Mark Dunne, Mid Bord na nOg, PRO
Drom village provided the perfect backdrop to our first final of the 2021 Championship. Old rivals Dúrlas Óg took on JK Brackens in ideal conditions and all those present were treated to an exciting game from start to finish.
The game started as expected, a battle in the middle of the field saw Durlas Óg’s Euan Murray come away with the ball. He placed a short ball up and over the JK Brackens defence to Darragh O’Dwyer for first blood to the team in red. The aforementioned Darragh O’Dwyer turned supplier for his team’s next score with a lovely pass to young Kieran Rossiter who slotted over and doubled their lead. JK Brackens got a hold of the game then and a long ball in from Joe Bourke saw it bounce off the post and out wide, millimetres in the difference. Kieran Rossiter once again turned playmaker and added to his tally with a fine score of his right! Brackens came firing back though and it would be Ryan Loughnane who would raise the first green flag of the day. A superb bit of individual skill saw him throw the Durlas Óg defence a dummy and slotted past Donnagh Hickey in the Durlas Óg net. Level game at the water break! Both teams came back from their sós with intentions of kicking on. Durlas Óg were first to attack with O’Dwyer but Kyle Quinlan pulled off a vital block to deny a certain goal. However, their goal did come shortly after, another piece of good play by their captain Eoin Webb found Aaron Darmody in space. Darmody must have been watching Loughnane’s first goal as he pulled a similar dummy to send his team three points into the lead at the break. 1-03 to 1-00.
With the sun shining, the game resumed and Durlas Óg looked to carry on how they finished the first half. A darting run by Darmody saw him shoot only for a tremendous save by the Brackens number 1, James Leahy. Durlas Óg were piling on the pressure but the Brackens defence of Delaney, Duggan and Deegan held firm. However, the goal did come and this time it was Niall Gleeson who found the net to push his team six points to the good. Kieran Rossiter in a man of the match performance added two more points, 2-05 to 1-00 the scoreline read. JK Brackens were not going to go down without a fight, the next few minutes saw Bracken really threaten the Durlas Óg goal. Dan Coffey was first to try his luck but Donnagh Hickey stood firm. Brackens kept mounting the pressure and Coffey had one more chance but Hickey said no! The goals did come though! A long Bracken’s ball found Padraig O’Shea who finished neatly to bring his team within five of the opposition. They weren’t done yet, as joint captain Niall Delaney kicked a monstrous high ball in and it found its way to the back of the net, 2-05 to 3-00 and those present felt extra time could be on the cards. Durlas Óg settled though and it would be captain Eoin Webb who would secure the last score of the game from a free. 2-06 to 3-00 as referee Johnny Butler blew the full time whistle.
Delight for Durlas Óg in a tight game. Kieran Rossiter, Euan Murray, Donnagh Hickey and Óran Fogarty all put in a great shift to name but a few. For JK Brackens, they can be immensely proud of their efforts, a thrilling second half that could have gone either way. Odhran Darling, Padraig O’Shea, Jack Burke, Dan Coffey and Ryan Loughnane all played a huge role to name but a few. In fact, this reporter could name the entire two teams as they all played their role in a great final.
Captain Eoin Webb gladly accepted the Mid U13 A Football Trophy from Mid Board Chairman PJ Bowden.
Teams and scorers:
Durlas Óg: Donnagh Hickey, Ciaran O’Mahoney, Órán Fogarty, Brody Donoghue, Kieran Rossiter (0-04), Darragh Cornally, Cillian Ryan, Euan Murray, Andy Rossiter, Aaron Darmody (1-00), Niall Gleeson (1-00), Darragh O’Dwyer (0-01), Eoin Webb (0-01), Diarmuid Barrett, James Mockler.
JK Brackens: James Leahy, Thomas Deegan, Kyle Quinlan, Jack Duggan, Jack Burke, Niall Delaney (1-00), Sean Stone, Joe Burke, Ryan Loughnane (1-00), Odhran Darling, Padraig O’Shea (1-00), Dan Coffey, Peter Breen, Shane Leahy, Sean Burke, Jack Noonan.
Referee: John Butler (Upperchurch Drombane)
Picture with thanks to John O’Loughlin
Hanafins Furniture & Floorcovering Dúrlas Óg GAA Club JK Brackens GAA Club 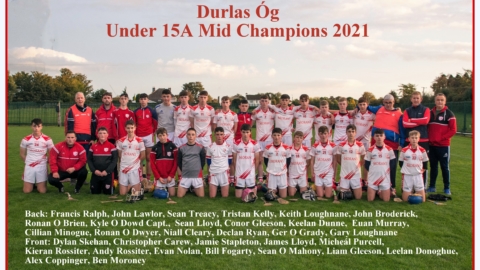 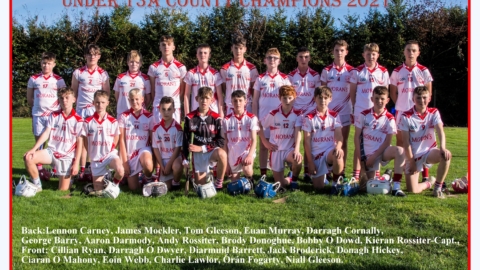 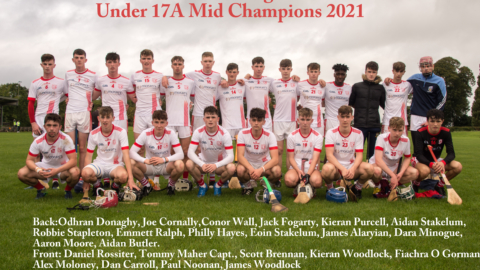 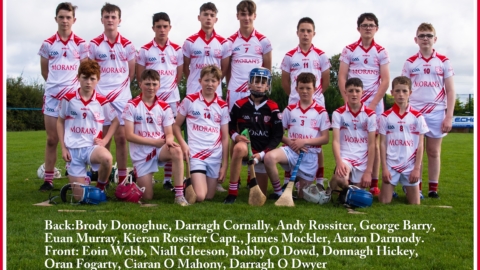